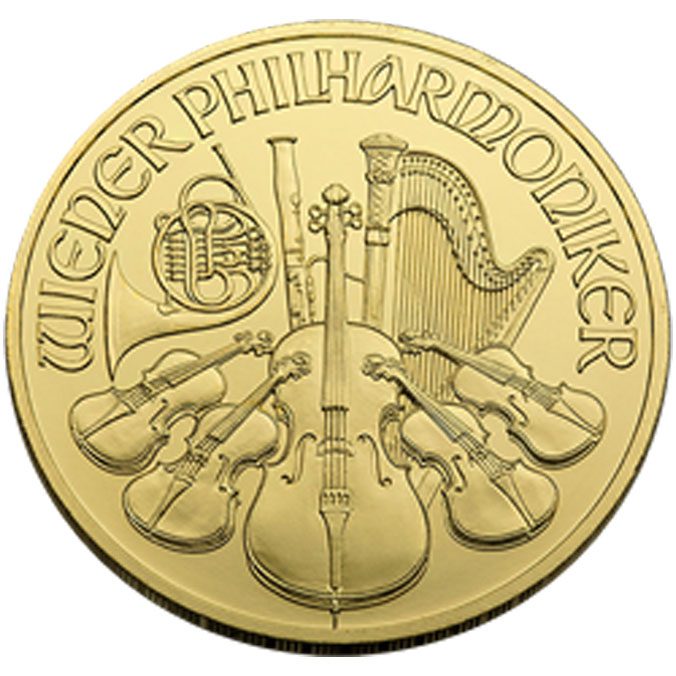 Sticking with our world coin theme, today’s highlighted coin comes from Austria. The 1 OZ Austrian Gold Philharmonic coin is one of the most beautiful coins that any collectors would be lucky to get a hold of. Just like the other blogs, we will discuss the coin and hopefully entice you to pick up one for your collection today.

The Austrian Gold Philharmonic, also known as the Vienna Philharmonic, was originally created and minted on the Austrian Mint in 1989. It came in two sizes; the one troy ounce and a quarter ounce. At the time the one troy ounce was worth 2,000 Austrian schillings (now worth about €100). The Austrian Gold Philharmonic bullion coin is the only coin that has a face value in euros to date. This gold bullion coin is said to be one of the world’s best selling coins by 1990. By 2012, there had been more than 14 million Philharmonics sold worldwide. That’s over 329 tons of gold!

The intricate design of this beautifully crafted coin makes it stand out from the rest. On the front, we have an engraving of the Musikverein Pipe Organ which can be found in the magnificent Wiener Musikverein, a concert hall in Vienna. On the back of the gold bullion coin there is a throng of orchestra instruments including a Vienna horn, a harp, a bassoon, a cello and violins.

Although this coin is not as rare as some of the other bullion coins we have to offer at Accurate Precious Metals, it is one of the most intricate and exquisite coins that you will come across as a collector. Call us or come by our Salem, OR shop today!